What Shawn Is Working On Now (Update on My Unemployment Situation)

John Haynes: The Man With Nothing To Lose Sample Chapter

Confronted on the Coney Island’s Boardwalk by a demonized former junior high school bully. Why do these things always happen to me?
As people scramble off the boardwalk, I meet Block’s glowering expression with a smile. “They let you out on good behavior Block? I say. “I thought your court date was a week from now-”
“I ain’t worried about no court.” Block snarls. “My new boss just put me on work release.”
From the havoc he’s been wreaking I think I know who his new employer is. E’steem hands clench into fists as she meets Block’s eyes. I look over at Benson; his breathing is getting shallow. The moments we take to fight Block could cost him his life. “Get Benson to the hospital!” I tell her.
“But John, you can’t fight him-”
She may be my bodyguard, but I can’t have her fighting my battles. “I’ve got this.”
E’steem disappears in a flash of light with Benson. After she teleports, I buy her some time to get him some help. “Still mad about what happened on the playground Block?” I taunt springing up off the floor of the booth.
“I’m still pissed about the ass whoopin you gave me back in Junior High.”
That fight got me suspended from school, cost me my relationship with Tisha and made me miss my prom and graduation. If I lose it like I did back then and give him the nigger moment he wants I’ll lose a lot more than some memories. Block swings on me. As I dodge the blow and he hits the floor of the booth I feel a shockwave of energy pulse from his fist. The force of the blow makes the booth we’re in explode into splinters; the world is a blur as I’m sent flying across the boardwalk. By the time I get my faculties together I feel grains of sand from Coney Island’s beach under me.
A flash of light explodes in my eyes; when it clears I feel Block’s large thick hand grabbing my shoulder.  “Let’s see you snap your fingers to get rid of me now!” Block yells scowling at me.
Block draws back his fist. Before he can swing on me, a ball of light explodes in Block’s eyes knocking him back. When it clears I see E’steem flying towards us with balls of light erupting from her fists. “Get your hands off my boyfriend!” E’steem orders.
Block laughs as he points daggers at me. “Still getting girls to fight for you.” He spits.
I’d like to think I could hold my own against him. “John pays me to keep people like you from starting with him.” E’steem says as she flies over to me. “So back off before you get hurt.”
“Got to say you know how to pick em’ John.” Block taunts. “This one is a lot finer than Tisha or that Ghoul you used to roll with. I’ma enjoy taking her away from you.”
E’steem points daggers at Block before she looks me over. “You okay?”
“I’m good helpmeet.” I reply. “Is Benson-”
“I got him over to Coney Island Hospital.”
“Great. We can deal with Block without him hurting anyone else.”
“Only person I want to hurt is you.” Block growls charging at us.
E’steem takes to the air as Block swings on me; I duck the blow and land a right in his gut. I wince after my punch connects. Hitting him is like hitting a brick wall; whatever powers he got from Lucifer are giving him some sort of invulnerability.
In the moment I take to wring out my fingers, Block swats me with the back of his hand. As I go tumbling into the sand from the force of the blow he starts trash talking. “You gonna need more than what you had in Junior High to take me down.” Block boasts. “I’m the irresistible force that’s an immovable object.”
His new powers may defy physics but I know it’s possible to beat him with God at my side. I’m thinking of a strategy that’ll give me an advantage when a warm wind blows past me.  “I’d like to think I’ve got the power to bring you down.” E’steem barks as she flies past me.
“E’steem wait-”
She doesn’t hear me; she’s too caught up in her emotions about what she’s read about The Block to take a minute to assess his new powers. E’steem flies at him at full speed; the impact of her hitting him in the chest with all her super strength causes a shock wave that ripples across Coney Island and sends me tumbling down the beach.
As I scramble to my feet I find out what happens when an irresistible force meets an immovable object when I see E’steem in the distance lying on the sand a few feet away from The Block. She doesn’t move; I’m praying that impact of hitting him only knocked her out. I start running towards her as fast as I can. Before I can get to her Block picks body up off the beach puts her over his shoulder and disappears in a flash of light. 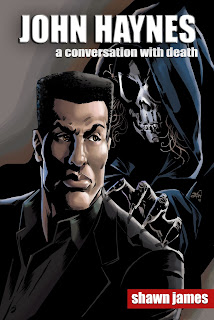 Thoughts on the 2019 Joker Movie

Most Incels believe that having sex with an attractive woman will be the thing that makes them a man and defines their manhood.

I have propose a critical question to Incels regarding that belief:

If a Retarded male has sex with an attractive woman does that make him a man?

Moreover, if a retarded male who has a lower IQ than an Incel has sex with an attractive woman dos that make him more of a man than the Incel who is smarter than he is? Does it make him a better man than an Incel who has all of his mental capacities?

When one thinks critically about that scenario they see how completely ridiculous it is for a boy or a man to define himself by the validation and approval of women.

It’s a lie that’s been passed down from one generation to the next that too many men have believed as the gospel truth.

The truth is having sex is not the thing that defines whether a boy graduates into manhood. What puts a boy on the road to manhood is the fact that God made him Male.

And Under the standard God a man is to have no other gods before him.  When an Incel defines his manhood by relationships and sexual encounters with a woman he is making women into gods. And putting her before The very God who created him.

In Corintihians it states that it is not good for a man to touch a woman. And if a man doesn’t have a wife he shouldn’t go out seeking a wife.
It also states in the Corintihans that the unmarried man cares about things related to God and is focused on pleasing God. This means he’s focused on being a steward of God and doing the work of the God on earth.

That’s what defines a man under the standard of God is the work he does for God on this earth. What he accomplishes in this life. That’s what makes him a man.  And that’s the standard incels need to start focusing on.

A retarded man has sex with a woman is still retarded at the end of the day.  And a man with low self-esteem like an Incel is still the same troubled man after he has sex with an incredibly attractive woman.

Incels, stop defining your manhood by whether or not you have sex with a woman.  The foundations of your manhood and masculinity were not created by women. It was created by God. So go find out what kind of man God wants you to be and stop worshiping women.

Posted by Shawn James at 4:59 AM No comments: