THE MAN CRISIS COMING THIS FALL FROM SJS DIRECT 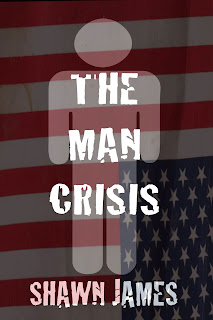 I haven’t had much time to blog over the last two weeks. That’s because I’ve been busy finishing the first draft of THE MAN CRISIS, the new nonfiction book I’ve been working on since April.

I mentioned THE MAN CRISIS on Obsidian Radio when I made an appearance on the May 11th show. And I believe it’s a book every man and woman should read. Because the state of affairs for American and Western Men is dire. A growing number of American and Western men are becoming frustrated, angry, and despondent as they try to make life work using the female life skills they learned from their single mothers in the world of adult men. As these men have mental short circuits due to the dysfunctional way they’ve been raised without a father in their lives, they explode in rage and participate a spectrum of violent behaviors from screaming fits to mass shootings.

And an increasing number of men are committing suicide because they believe they have no hope of ever finding a place for themselves in the western world as a man.

As I did more research into the subject, I began to notice a historical pattern relating to the decline of men over the last 50 years and the rise of the Feminist movement and the establishment of single mother households in the late 1960s. As I did more research I began to discover that the second and third generation of boys raised in single mother and divorced households who began to come of age in the 1990’s and mid 2000s correlated with the increase in mass shootings and a spectrum of violent behaviors.

Now I had talked about how destructive single mother households were to boys on the Men’s Advocate Show with Linda Gross a few years ago when we discussed my classic blog Ways Single Mothers Destroy Their Sons. And with the escalation in violence over the last few decades it’s clear to me that we are in a crisis right now due to the way women have raised boys to become men. Thanks to feminists telling women that they could raise a boy to be a man over 50 years ago, there are three generations of these Beta Males out there and they’re ticking time bombs due to the dysfunctional way they were raised in single mother households. Like land mines left underground decades ago, no one knows when they’ll explode or what damage they’ll do people’s lives when they go off.

In THE MAN CRISIS I’m going in depth on the growing crisis related to American and western men and try to explain why so many men are in crisis today. It’s a subject most Americans don’t want to talk about because Big business and politicians are afraid of alienating the large consumer and voting blocks of American and European Women. But it’s something we have to talk about because if we don’t do something about the growing Man Crisis, there may not be a way to ever Make America Great Again.

Right now I’m working on the second draft and doing page layouts for THE MAN CRISIS. I’m hoping to have the book available in Paperback and Kindle formats this November. And I’m hoping men and women get this book because it may help many of those troubled men out there work towards breaking out of a vicious cycle and move forward with their lives.
Posted by Shawn James at 9:58 AM No comments: 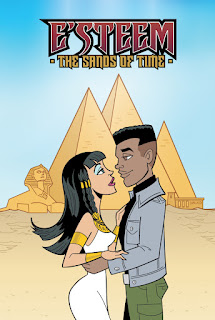 Just got the cover art for the E’steem: The Sands Of Time by Bill Walko and it looks AMAZING!

I was FLOORED when I first saw this piece! It looks just like an animation Cel for a Disney movie! I love how bright the colors are and how everything POPS! IT FEELS ALIVE!

Bill did an excellent job conveying teenage love with this cover! I love how 14-year-old E’steem and 14-year-old John Haynes have these looks of youthful innocence of two kids who are just finding out what love is for the first time. The body language is perfect for two KIDS, denoting their curiosity, not their sexuality.

There’s a great theme of optimism and hope in this cover. From the bright blue background to the golden looking pyramids to the hopeful looks on the character’s faces everything just feels so inspiring and uplifting.

The first pieces of Bill Walko’s art I ever saw online were his versions of the X-Men, the Teen Titans, and Young Justice. And he brings all that youthful energy and heart from those early pieces to this MASTERPIECE of a cover.

For this story I wanted E’steem to have the look of an Ancient Egyptian Disney Princess. And Bill’s art definitely captures the spirit of Disney’s Princesses like Belle, Ariel, Jasmine, Snow White and Sleeping Beauty. Could E’steem hang with Disney’s Princesses? With Bill’s running the animation department I believe she could.

And Bill’s version of teenage John reminds me a lot of Marty McFly from the Back to the Future movies. Even though he’s out of place, the 14-year-old John from the dark, grim n’ gritty 1980s provides a great contrast to the bright Ancient Egyptian theme with his realism. John’s olive BDU pants, faded jean jacket, and black mock neck are dark enough for the rough streets of 1980s New York, but bright enough to fit right in Ancient Egypt.

You’ll definitely want to pick Up E’steem The Sands of Time this October when I kick off Fantasy Flashback Fall. It’s an action packed Time Travel Fantasy romance reads just like a Disney movie. It’s filled with lots of action adventure and fun, and gives you a unique perspective on Ancient Egypt you won’t find anyplace else.
Posted by Shawn James at 7:17 AM No comments:

I’ve been itching to do another vampire Story. And another Goth Story. And I plan on fusing those concepts together for a new story set in the SJS DIRECT UNIVERSE. 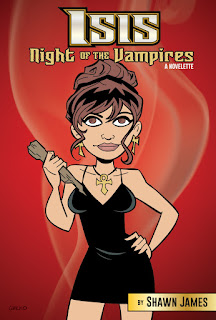 In Isis: Night of the Vampires I introduced Lilith Graves. And I left some hints to how she became a vampire. Now I want to do an origin story featuring Lilith so I can expand on the Vampire Lore of the SJS DIRECT Universe and explore the Black Goth Subculture in it.

Set in the 1990’s, Eternal Night shows how hardworking Goth Grad student Lilith Graves has a future so bright she’s gotta wear shades. Celebrating getting her MBA from NYU and the new job she’s going to start on Monday Morning at a major fortune 500 company, she attends one of Mad Matilda’s raves. It’s at that rave that she meets a handsome vampire who gives her the bite that changes her life. 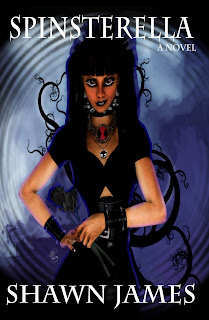 Spinsterella is coming to the SJS DIRECT Universe. So get ready.

While everyone knows how Lilith got back on the road to Salvation in Isis: Night of the Vampires, I thought it’d be interesting to see how she would up on the road to Eternal Damnation years ago. In this story I hope to explore how she got caught up in the world of New York’s Brood. Over the course of the book I want to explore New York’s Vampire culture and show how it relates to its Goth subculture.

I’m going for a contemporary take on Vampires in Eternal Night. It’s gonna be Part Lost Boys, Part Vampire in Brookly, Part Buffy the Vampire Slayer, but from the Vampire’s perspective. Lilith didn’t ask to become a vampire, and is trying to adjust to a culture she doesn’t want to be a part of. A woman caught between the politics of the Brood and Loretta Van Helsing, a relentless Vampire Hunter who works for the NYPD she’s fighting to try to find some sort of life as she gets used to being undead.

Right now I’m just brainstorming and outlining on Eternal Night, but I’d love to get to work on this book sooner rather than later. Goth and Vampire stories are a boatload of fun for me and I’m looking forward to writing this book!
Posted by Shawn James at 6:02 PM No comments: