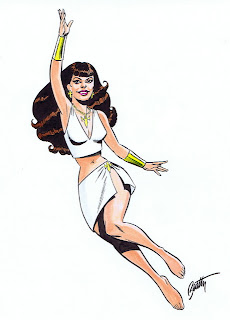 A long time ago in a ghetto far, far away I wanted to be a comic book writer. And  I’m getting closer to achieving that goal.

For the last couple of months I’ve been working off and on on an Isis graphic novel adaptation of the upcoming Isis: All That Glitters. And I’m just about finished putting together the script for that book. The feedback I’ve been getting on the firstten pages of the Isis: All That Glitters script has been extremely positive. So I’m pondering going from a script to developing it into the first comic of the SJS DIRECT Imprint.

Isis was originally supposed to be a comic book. But because the comic book industry was impossible to break into back in 1999 when I created the character, I wound up turning it into a series of Superhero Prose/Fantasy/YA books. With the books growing a following in paperback and Kindle, I thought it was time to take that next step into making Isis into the comic book it was originally planned to be.

It was a lot of WORK writing Isis: All that Glitters. Comic writing is NOTHING like novel writing or screenwriting. Comic writing is a very unique skill set; each part of the story has to be told with a series static images that have to be dynamic enough the reader can see them move. And translating words from a story into pictures an artist can see through a series of shots was a challenge. I had to pick just the right shots and use just the right words to describe a panel to move the story forward.

With Isis: All that Glitters I had to make several changes from the book to make the comic book version of the storywork. Some scenes from the original book were cut, and others changed to fit the story model. But I did my best to remain true to the original story I wrote.

I’ve always wanted to do comics. And I learned a LOT about writing comics working with comic artists like Bill Walko and Mike Williams designing covers for Isis and E’steem series books and books like The Legendary Mad Matilda and John Haynes: A Conversation With Death. And I used all those skills to work towards putting together a pair of comic scripts for the first Isis Graphic Novel.

The Isis Graphic Novel I’m planning will be about 64 Pages and feature two stories, The Isis All That Glitters feature and an adaptation of E’steem: No Good Deed and maybe a pinup or two of the Goddess next door and Hell’s aspiring Angel. Right now I’m working out the logistics of how much things will cost before I start contacting artists and lay out plans for an indiegogo. If I can get a great artist to work with me on the project I’d love to raise funds for an indiegogo and once that’s done eventually sell the book on Amazon on Kindle in eBook and Paperback formats.

If I can get the indiegogo to be a success I’d love to do a John Haynes: A Conversration With Death Adaptation with a Spinsterella and the Spooky Girl Back up feature. While I’d love to do Graphic Novel adaptations of all the Isis and E’steem series books I’m taking baby steps here. There’s a lot I still need to learn about comic book publishing before I dive into that part of the book business.

Right now I’m working out the logistics of publishing Isis: All That Glitters. I know that in addition to the artist I have to hire a colorist and a letterer if I put this project together. Comic publishing has a LOT of components and I have to figure out how they work before I launch any sort of crowdfunding so that all those costs are covered.

While I’ve still got a long way to go on this project, I’m happy to have made this much progress. I’m getting closer to achieving my lifelong dream and I’m hoping to finally have a comic book version of Isis in everyone’s hands sooner rather than later.
Posted by Shawn James at 1:20 PM 7 comments:

Thoughts on the Captain Marvel Trailer

Just Saw the Captain Marvel Trailer. And from what I saw I can honestly say this is going to be Marvel Studios first major flop.

From the trailer Captain Marvel doesn’t feel like a Marvel Studios movie. It looks and feels like a bland and generic. Like a CW Show. That’s not what you want in a movie with a $100 million plus budget. Wonder Woman this ain’t.

Basically Captain Marvel is gonna be Marvel’s version of CW’s Supergirl. And I don’t mean fun Season 1 Supergirl. It’s gonna be feminist Season 3 SJW Supergirl, the one with no personality, no soul and no heart. The one who spends all her time preaching to the audience and complaining about her life.

Captain Marvel’s story looks like the usual one Hollywood trots out when they write their so-called “Strong” heroines. Woman crashes out of the sky, doesn’t know who she is and spends most of the movie trying to figure out her past while she prepares to take on whatever big menace she has to confront in the third act.

Very disappointing when you consider that Captain Marvel has been hyped up to be the planet moving super badass who is supposed to be helping the Avengers take on Thanos. The character presented in this trailer doesn’t do anything to make the viewer believe that she’s someone who can be a cosmic level hero or even a threat capable of challenging Thanos in Avengers 4.

Then there’s Brie Larson. From what I saw onscreen Brie Larson has the personality of a block of wood. And I don’t mean natural wood. I mean the pressed sawdust wood you get in IKEA furniture. Yeah, Larson has an Oscar, but in the role of Carol Danvers/Captain Marvel She has no screen presence, no personality and no “voice” that makes you believe she’s a superhero. She doesn’t radiate any of the confidence and charisma that Robert Downey Jr. does when he portrays Iron Man or Chris Evans does when he plays Captain America. She has no energy that engages the audience. Watching Brie Larson is like watching a CORPSE onscreen.

Maybe she’d do better playing Janey Belle in a Zombie Tramp Movie. But I doubt Dan Mendoza would want to have someone as TERRIBLE as Larson playing his villainess.

The big problem with Captain Marvel’s trailer is that it just makes you feel indifferent. Unlike Captain America: Civil War or previous MCU movies like Iron Man that got you excited with all the badass action sequences, Captain Marvel doesn’t have a single scene in its trailer that makes you say I WANT TO SEE THIS. After I got through watching this trailer, I was feeling…MEH.

And MEH is not a feeling a movie studio wants viewers, especially longtime comic fans to have about the superhero movie leading up to what’s supposed to be the Grand Finale to the MCU, Avengers 4.

The way things look right now from that trailer Captain Marvel is to the MCU what the Force Awakens was to Star Wars. And I’m hoping Avengers 4 isn’t Marvel’s Last Jedi. With the rumors of alternate realities and time travel, I have to wonder if Captain Marvel is just a precursor to a film that could be Disney’s biggest failure since The Black Cauldron.

It’s clear to me from what I saw in the Captain Marvel trailer that the wheels are falling off the MCU bus. And if these frames are the best parts of Captain Marvel, then Marvel Studios first film with a female lead could possibly be its last.

Posted by Shawn James at 8:05 AM No comments: