Marve & DC Dump Trades at Liquidators The Collapse of the Comic Book Ind... 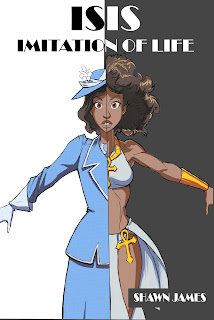 The second book that will be part of SJS DIRECT Fantasy Flashback Fall will be Isis: Imitationof Life. Inspired by the classic 1934 film, Isis: Imitation of Life is set in 1930s Jim Crow America and deals with how Isis was a hero in those tense racial times. While White heroes and heroines like Wonder Woman, Superman, Batman And Green lantern could have fantastic adventures where they used their super powers, I wanted to tell a story of how Isis fought a different battle in an era where Black people were second class citizens.

With Isis:Imitation of Life I wanted to pay homage to Golden Age comics and pulp heroes like Doc Savage. And I wanted to show my respect to the greatest generation of Black people, the everyday men and women who made every effort to show that Black people had dignity and respect in an era where racists made every effort to dehumanize Black men and Black women. These were our heroes, the Black mothers, the black fathers, the Black teachers, Black business owners, and Black professionals who fought to give Black people a fighting chance in a separate but unequal society.

I wrote Isis:Imitation of Life back in 2016, but I held back on its publication until now because I wanted to show my respect for the greatest generation of Black Americans by putting a great cover on the book. And Drew Swift did an AMAZING job designing the Imitation of Life cover. The art does a beautiful job showing us the two worlds Isis lives in, the goddess underneath the clothes of the woman and how she’s a hero at heart.

Isis: Imitation ofLife is available in Paperback on KindleUnlimited right now. You definitely want to get this one, it’s a powerful story that tells a story that teaches about Black history and shows how everyday Black men and women were heroes during the darkest time in American history.

Posted by Shawn James at 7:46 AM No comments: